Attacks on the Castled King 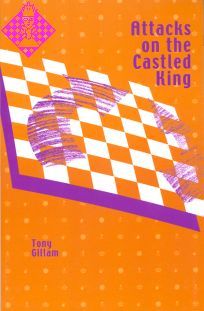 This book is designed to help the player who wants to win games quickly and in an interesting manner. Today top masters play to win space, perhaps a pawn after a middle game struggle, or even the exchange. The average player is much better advised to concentrate on the important objective: Mate the opponent's King! That may not lead you to defeating a Grandmaster at the next big tournament, but it will certainly pay dividends in your next class section event. The author provides 95 example games, with carefully positioned diagrams, and clear explanations, to give the student understanding of exactly how to attack the opponent's King when it has castled. The games are both entertaining, and instructive. The book will increase your confidence when you next visit your chess club or enter a tournament. Mr. Gillam is author of the popular Better Chess series of four volumes of positions for study of chess tactics.

As the sole object of a game of chess is to checkmate the opposing king, it is important for everyone to know the main methods of trying to achieve this aim. Fortunately, learning these methods is not only instructive, but also highly entertaining.

In this book we are going to concentrate on attacks on kings which have castled and are sheltering behind a wall of pawns. In another book we intend to deal with attacks on kings left in the centre.

This book is organised into sections based on the most common types of attack. They are:

Using the back rank

The f-pawn has been moved

The g-pawn has been moved

The h-pawn has been moved

Castling on the queen's side

The examples given include not only positions where the final attack is seen, but also full games so that you can see how the attack arises and the kind of mistakes that are made by the defender.

One thing this book must not do is to persuade you that castling is dangerous. In most positions your king will be safer after castling than if left in the centre. It will be safer still if you learn from this book the type of attacks that your opponent will try to mount against your castled king.