The store will not work correctly in the case when cookies are disabled.
Artikelnummer
SONARHGMA
Autor
Daniel Naroditsky 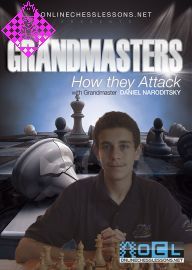 If you want to be a strong chess player, you have to constantly attack your opponents! The best players in the world strive to make a threat with every single move, consistently applying pressure and creating problems that their opponents are forced to solve. Chess has evolved substantially in the past 100 years and to succeed in today's game, you must be thoroughly dedicated to attacking chess. "How Grandmasters Attack" features over 3 hours of premium chess instruction by 18 year old Grandmaster Daniel Naroditsky, a chess prodigy that is well-known for his prowess as an attacking player. GM Naroditsky heavily emphasizes the importance of aggression in chess, demonstrating various methods of attack by analyzing select games from top-level Grandmasters. Naroditsky also explains a few of his own games, and it is truly fascinating to learn about the decision-making process of this talented young GM. This chess DVD is perfect for beginner and intermediate chess players who are trying to take their game to the next level. You will immediately experience better tournament results after watching this DVD because you will always be focused on making an attacking move, pressuring your opponent, and consistently forcing your opponent to solve complex problems.

"Attackers may sometimes regret bad moves, but it is much worse to forever regret an opportunity you allowed to pass you by" - Garry Kasparov