The store will not work correctly in the case when cookies are disabled.
Artikelnummer
SOLEMPALAGM
Autor
Damian Lemos 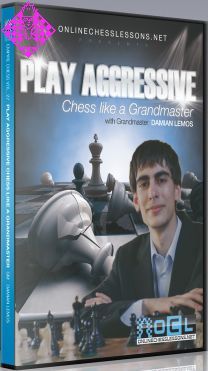 If you are not playing aggressive chess, you are not playing good chess. The game is just that simple! I have beat many players that are much higher rated than me and should be better than me, but I played more aggressively. If you come out swinging from the very first moves in a game, constantly striving to create threats and place pressure on your opponent you are going to be playing winning chess. If you employ the opposite style and try to create a solid position that your opponent can't crack - you are going to be playing losing chess. In the 21st century, you must play aggressive chess to be successful. This is true at any level, from absolute beginner all the way up to World Chess Champion; you must attack your opponent if you want to win the game! - FM William Stewart

"Play Aggressive Chess like a Grandmaster" features hours of elite chess instruction by Grandmaster Damian Lemos, reviewing recent games by Super-GMs to demonstrate how the best chess players in the world today are using aggressive chess to win important games. It is fascinating how GM Lemos describes basic principles that beginner players can use in their games, and then goes on to show how players like Garry Kasparov, Magnus Carlsen, and Veselin Topalov have repeatedly used these exact same concepts in their own games at the highest levels. This chess DVD is guaranteed to improve your game because you will start making the most out of every opportunity to create threats, place pressure on your opponent, and create problems that your opponent will be forced to solve.