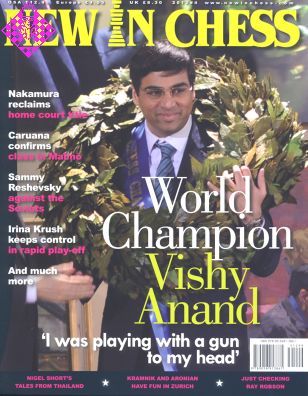 008 Taking Chess to the Museum If it's up to Russian billionaire Andrey Filatov, having the World Championship match in a museum heralds a new trend in chess.

010 State of the Art in Moscow As he had predicted all along, Vishy Anand had to fight for his life to retain his title at the Tretyakov Gallery and only managed to do so in a scintillating tiebreak. Challenger Boris Gelfand left Moscow with his head up high after 'the best month in his life' and countered criticism of the contestants' play with a heart-felt plea in defence of the grand tradition of chess and its cultural significance.

032 Interview: Vishy Anand While his challenger was drinking in every minute of his first fight for the crown, defending champion Vishy Anand was reliving less uplifting moments. 'It's very difficult to enjoy the World Championship. I think you can enjoy having been in one.'

040 Nakamura Reclaims Home Court Title Three down, five to go. Hikaru Nakamura returned to his national championship, after a year's absence, as the heavy favourite. He finished a point clear, beating his nearest rival Gata Kamsky with black in the process.

062 Sammy against the Soviets Little did Samuel Reshevsky know what really awaited him, when on the eve of the Zurich 1953 Candidates' he said: 'This is going to be a tough tournament to win – probably the toughest of my career.'

074 Out of Love for Chess With the financial support of Russian businessman and ardent chess lover Oleg Skvortsov, the Zurich Chess Club staged a friendly match between Vladimir Kramnik and Levon Aronian at the opulent Hotel Savoy Baur en Ville.

098 Novotnys and Queen Sacrifices Jan Timman takes you on another tour of the wondrous world of studies.

102 Tales from Thailand Nigel Short won the Thailand Open. It wasn't his first visit to Siam.

106 Just Checking Which three people would Ray Robson like to invite for dinner?