The store will not work correctly in the case when cookies are disabled.
Artikelnummer
SRXKASMS4
Autor
Garri KasparowJames Plaskett 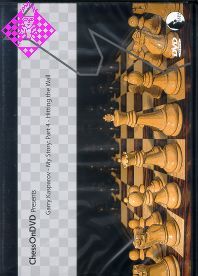 In this unique series of films, we are privileged to learn about the struggles and successes of the 13th World Champion from his own unique perspective. The story of his epic journey from teenage hotshot to modern chess icon is chronicled in depth and with revealing detail. For the first time ever we go behind the scenes and catch the inside stories to discover the real Garry Kasparov. This great new series reveals in detail all the highlights and drama of Garry's meteoric career, and the inside story behind his one-man chess revolution. Garry offers new and dramatic insights as he looks back on the games, incidents and personalities that have moulded not just his own legacy but the future of chess itself. Along the way we will gain a rare look into how the strongest player of all time learns and improves. Every chess player will be fascinated as Garry explains his pioneering approach to attacking play and his unique chess theories of "material, time and quality".

This is not a calm, reflective look back. It is a thought provoking collection of incident, instruction and high drama on and off the board. By viewing these events through his own eyes we will come to understand who this controversial, larger-than-life man really is - what drives him, and what shaped him. The shadows of political intrigue would threaten to do what no chess player could manage - to eliminate Garry from the hunt for the World Title. And when the long awaited confrontation between Karpov and Kasparov arrived, it turned out to be the most remarkable and controversial match ever played.