The store will not work correctly in the case when cookies are disabled.
Artikelnummer
LXPHIAOTGOC
Autor
Philidor

Analysis of the Game of Chess 1777 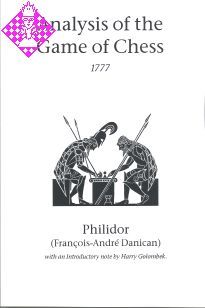 Published in 1777, and including the text of the 1749 edition, this is possibly the first chess book in English. The greatest chess-player amongst musicians and the greatest composer amongst chess-players, Philidor was undoubtedly the leading player in the eighteenth century. For nearly fifty years he was what we would now call World Champion and for many of these years he was the leading opera composer in France. The best player in France, M. de Kennur, Sire de Legal, took an interest in the boy. At first it seems he gave him the odds of a Rook, then, after three more years, had to play him level and finally he was beaten by his erstwhile pupil in a match in 1750. But already for some years he had been considered the best player in France. It is interesting to observe that he never regarded himself as a professional chess-player but solely as a musician who supplemented his income from composing by playing chess and giving blindfold displays. For he had discovered that he had a gift for playing blindfold and in 1744, before an awe-struck public, he played two games simultaneously and blindfold. Any master could do this nowadays and more; but Philidor was the first to perform the feat in Europe. In 1747 on a visit to England he demonstrated how much greater a player he was than any of his contemporaries by beating Philip Stamma in a match at odds in London by 8-1. This was an astonishing feat since Philidor gave Stamma the odds of the move and the formidable advantage that any drawn game should count as a win for Stamma. He returned to the Continent and there wrote and published in 1749 in Paris the celebrated Analyse du jeu des Echecs. The theme of the work - that 'pawns are the soul of chess' - was so modern as to be about two hundred years before its time. It was rather as though Nimzowitsch and his theories of the twentieth century were contemporary with Philidor: he was not really understood until a couple of centuries had passed. But what he wrote on the endgame and his general advice was obviously sound and marked a step forward in the way of scientific analysis.

- From the Introductory note, by Harry Golombek.