The greatest players of the 20th century
Eigenschaften
Vergriffen 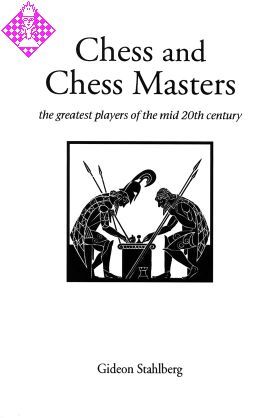 Gideon Stahlberg was a Swedish Grandmaster who rocketed to fame when he won matches against Spielmann and Nimzowitsch in the early 1930s. Stahlberg went on to compete in the two World Championship Candidates Tournaments of 1950 and 1953. He was chief umpire for many World Championship matches in Moscow during the period of soviet hegemony. Those who knew him found him a witty companion who enjoyed good living and was also an expert bridge-player. His best chess games are marked by extreme elegance, as is his prose style.

Chess and Chess Masters is a first hand account of the strengths and weaknesses, of the genius and foibles, of the world's elite, written by a man who met and played them all. This remarkable book is graced by the most elegant prose, courtesy of Stahlberg, improved, if anything, by Harry Golombek's superb translation. The book is full of telling and memorable phrases. Its consists of a series of brilliantly executed thumbnail sketches of such towering figures as Lasker, Capablanca, Alekhine, Euwe, Borvinnik, Smyslov, Petrosian, Nimzowitsch and Keres, along with beautifully annotated examples of their play.