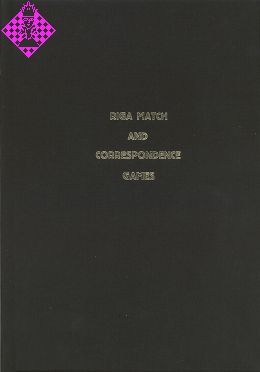 Introduction In chess the name of Riga is surely one to conjure with, for it has been synonymous with efficiency in analysis and depth of research these many years past - an efficiency that, in the case of the Baltic seaport, has spelled unparalleled success. During a period of years, stretching from 1896 to 1910, a series of matches, consist­ing of two games each, were con­tested by the tournament commttee of the Riga Chess Club with various clubs of high standing, including the Berlin, Moscow, Stockholm and Orel Chess Clubs. Moves in these games were exchanged by telegraph, but under a time limit and other conditions similar to those which obtain in correspondence chess. In other words, ample opportu­nity was afforded for the widest range of analysis.

In the members of the Riga committee that club had the services of men who may well be said to have few peers in the art of dissecting a chess position and dragging forth to light its manifold possibilities. The list includes some names of world-wide renown in the field of end-game studies and problems. Every member of the committee is pos­sessed of much more than the average intelligence and each is a man of parts wholly apart from chess. That such a company working in unison should pro­duce results worth while and make con­tributions of lasting value to the analysis of the game goes without saying. Follow­ing is the roll of honor: Professor Dr. P. Bohl, Paul Kerkovius, Carl Behting, Robert Behting and August Lueth.

These gentlemen responded readily to the suggestion that a collection of the match games in book form would be welcomed by many chess players, with the result that a complete set of the scores, with exhaustive analysis in each case, were placed at our disposal. The committee was also invited to make se­lection of a limited number of choice games played by correspondence and which originally appeared in the pages of the "Rigaer Tageblatt" and the "Baltische Schachblaetter."

Conditions directly traceable to the outbreak of the war interfered with the immediate publication of the book, which, however, should be none the less welcome because of the unavoidable de­lay. Meantime, the Riga Defense, brought into prominence by its use in one of the match games between Riga and Berlin in 1906, has found its way into many of the text-books. In the committee's annotations of the game the defense is also referred to as the "Bohl Variation," credit being accorded to Professor Dr. P. Bohl.

We confidently believe that this small but select collection of games will be ac­ceptable as classics. With the accom­panying annotations they will be useful and instructive alike to the student and advanced player and will compare favor­ably with the painstaking analysis to be found in the works of even so eminent an authority as Dr. Tarrasch. As such we have no hesitation in recommending them to the considerate attention of chess practitioners everywhere.