The store will not work correctly in the case when cookies are disabled.
Artikelnummer
LXSOLTWTESAC
Autor
Andrew Soltis

The wisest things ever said about chess 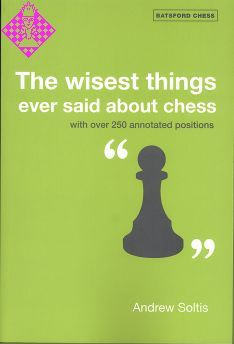 'The best opening is the opening your opponent doesn't know.'

'The winner of the game is the player who makes the next-to-last mistake.'

This fascinating book gathers together the most astute insights on chess ever uttered, culled from three centuries of the world's greatest players. Almost every one of these invaluable maxims is illustrated with an annotated chess position, making the book a short cut to learning from the masters.

These snippets of wisdom are arranged into chapters for easy reference: Attack; Calculation; Defence; Endgame; Evaluation; Mistakes; Move Selection; Openings; Pawns; Pieces; Psychology; Sacrifice; Strategy; Studying; Tactics; Technique; Tournament Tactics. This is a great book both to read through and to dip in and out of - every page contains a nugget of wisdom that will help you hone your own chess skills and win your next game.

Each new generation of chessplayers discovers ways to play the game better. What we don't appreciate is how much of this is rediscovery. We rediscover what was simply forgotten. When Vladimir Kramnik said calculation is "far more important in defense than in attack" it was a profound insight. Kramnik indicated it was also original. It wasn't. Rudolf Spielmann - and, most likely, others before him - expressed the same idea in similar words (as in # 39).

This is a book about ideas like that. Some are well remembered, others have been forgotten. These thoughts are expressed in maxims, aphorisms, wisecracks, kibitzes and proverbs that have been passed down to us. Some can be called "rules." That's a word that divides players. Amateurs love rules. Masters love to ridicule them. "A chessplayer's talent is measured not by his knowledge of the rules but his ability to find exceptions to them," wrote Viktor Korchnoi. "Only the exceptions matter," said Alexei Shirov. But GMs follow rules like everyone else. The occasions when they do so vastly outnumber the times that they break rules, as a look at any grandmaster game plainly shows.

Rules and maxims should not be used as a substitute for thinking. But they are wonderful as prompters to thinking. Good rules point in the right direction. They "should be used only as mnemonics, reminders of what to think about," as Kenneth Mark Colby, an avid amateur player and respected psychiatrist, wrote. One of the great chess teachers, Cecil Purdy, got it right. "The true art of the teacher lies in stating rules in memorable form," he wrote.

I've tried to collect the wisest of sayings expressed in the most memorable forms. That doesn't mean the earliest form, and this is not a book of forensic etymology. In many cases the collective wisdom of chess has come to us as folk wisdom, of unknown origin. In many other cases, the first way a thought was expressed was improved by others. Wilhelm Steinitz wrote in The Modern Chess Instructor, "In the ending...it is generally best to place the rook behind the pawns in order to not obstruct their advance. But when fighting against hostile pawns, it is most advisable to attack them in the rear or to stop the one furthest advanced in the same manner." This is an extremely useful thought, and may very well have passed through other minds before Steinitz's. But the version we remember is Siegbert Tarrasch's succinct "A rook belongs behind a passed pawn."

Many if not most of the great sayings like that are sweeping generalizations. That's part of the reason we remember them. When Tarrasch wrote, 'There is no move that does not weaken some part of the position," what was remarkable is that he could preface it with a single exception - "Except for the mating move..." He admitted he was joking, several pages later in The Game of Chess, when he offered another rule without an exception: "Never move a pawn and you will never lose a game."

Wit, like exaggeration, is a common feature of great sayings. But there are many familiar witticisms that you won't find in these pages because they have little application that will help you improve your game. As much as I enjoy sayings like "A draw, like love, requires two participants" (Georg Marco) or "Every chess master was once a beginner" (Irving Chernev), to name a few, I didn't feel they belonged in a book devoted primarily to advice.

The wise sayings I chose, and in some cases paraphrased, vary widely in form and content. Some just give you something to think about ("A castled rook is already developed," #178 and "A knight endgame is a pawn endgame," #68). Others provide a plan of action ("With a pawn on e5 White must attack the king," #4 and "You're never mated with a knight on f8," #36).

Others tell us what not to do ("Never look for other possibilities when you have one satisfactory winning line," #271). Still others try to puncture your prejudices ("There is no such thing as a winning move," #97 and "A passed a-pawn looks more dangerous on the second rank than on the seventh," #91).

One can only marvel at the richness of wisdom that has been handed down to us. Our task is to build on it. But first we have to remember it. Lev Polugayevsky said the benefit of "book" knowledge in the opening is to enable players to explore at move 15 without having to rediscover what to do at move two. "Most of all, it's necessary to use book to avoid inventing the bicycle," he wrote, according in 64 magazine, July 2001. That's true of all aspects of chess skill. Remembering will save us from having to invent a lot of bicycles.