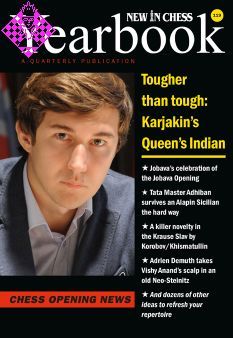 Baadur Jobava himself explains the big fun of the Jobava opening (1.d4, 2.Bf4, 3.Nc3), and Rene Olthoff pays tribute to Genna Sosonko: his Dragons, his Catalans, his deep knowledge and sparkling personality.

In the 256 pages of this issue of the Yearbook you will further find answers to urgent questions such as:

The Forum Section features new theoretical contributions by, among others, Bogdan Lalic and Vishnu Prasanna.

In his column Repertoire Building with Benjamin, the American GM continues his treatment of the highly important position type with an isolated queen’s pawn.

In Kuzmin’s Harvest, Alexey Kuzmin highlights the most important opening novelties in the Candidates’ Tournament in Moscow.

With more than 75 practical opening exercises to test your understanding.
Mehr von New in Chess