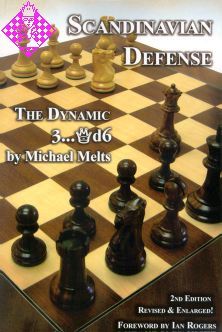 In 2001, Correspondence Master Michael Melts' book on the dynamic 3...Qd6 variation of the Scandinavian Defense grabbed the attention of chess world. It began to be played regularly at all levels. Novice and Intermediate players found it easy to learn and understand, while powerful grandmasters such as Sergei Tiviakov realized it was an excellent line in which Black could play fearlessly - and soundly - for a win.

Now, in the second edition of The Scandinavian Defense: The Dynamic 3...Qd6 , the author has added a tremendous amount of new analysis, insight and practical recommendations. This revised and enlarged second edition will provide both a solid foundation for meeting 1.e4 while at the same time allowing considerable room for creativity and original play.

"Melts' serious study of a serious opening shows that at the moment not much need scare Black. Easy to play and theoretically sound - how many openings can boast that?" - From the Foreword by Australian Grandmaster Ian Rogers

004 Foreword to the First Edition

006 Foreword to the Second Edition

008 Preface to the First Edition

009 Preface to the Second Edition

016 Part I Information for Club Players