The store will not work correctly in the case when cookies are disabled.
Artikelnummer
SCOSHIMBGISPA2
Autor
Alexej Schirow

Shirov, My Best Games in the Spanish - Vol. 2 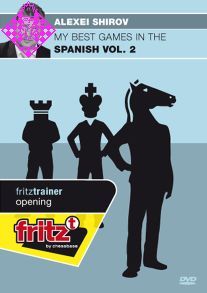 Shirov's first Ruy Lopez DVD found an enthusiastic reception by the audience. In this second and current volume, Alexei Shirov continues his presentation - with topical games of his own, starting in October 2006. At the high-class tournaments of last year and also during the candidate matches in Elista (versus Adams and Aronian), Shirov was trusting the Spanish Opening both with the white and the black pieces. As Black, he most successfully returned to the system 5. ... b5 6.Bb3 Bc5 (5 games). As White, he had to face the diffcult question how to deal best with the popular Marshall Attack (8. ... d5) (3 games). Further topics of discussion are the Berlin Defence as well as so important systems of the Closed Ruy Lopez like the Breyer, the Flohr-Saitzev or the Chigorin. Enjoy six hours of chess with one of the best players of our times.