The store will not work correctly in the case when cookies are disabled.
Artikelnummer
LXVORMADSC3
Autor
Sergej Voronkow 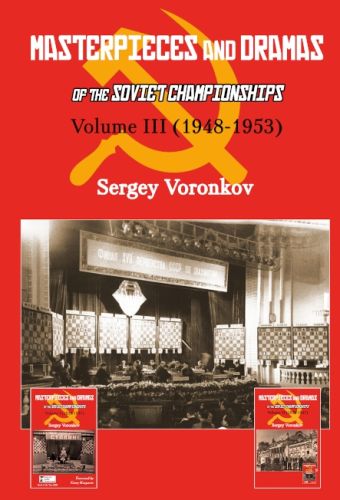 The third volume of Sergey Voronkov's epic tale takes the reader on a historical journey through the late Stalinist period in the USSR. It covers in depth the five Soviet championships from 1948 to 1952 and the playoff match between Botvinnik and Taimanov in 1953, which concludes one month before Stalin's death. Against a background of rampant anti-Semitism, a new wave of repressions and descent into the First Cold War, in which chess was an important front, the USSR captures the world chess crown and Botvinnik and the generation that followed him, including Smyslov, Keres, Bronstein, and Boleslavsky, assert their places at the top-tables of Soviet and indeed global chess. Yet a new group of legends begins to emerge, including Petrosian, Geller, Korchnoi, Taimanov, Averbakh, Simagin, Kholmov, and Furman making their championship debuts, as well as a semi-final appearance by Nikitin and Spassky's first quarter-final. At the same time, the reader learns about lesser-known masters Yuri Sakharov and Johannes Weltmander, victims of Stalinism who found solace in chess from their otherwise tragic lives.

The present volume contains 77 games and fragments, once again mostly annotated by the participants and other contemporary masters, augmented with modern computer analysis. It is illustrated with over 220 photos and cartoons from the period. Many of these photos come from unique archives, including that of David Bronstein, and are published for the first time.

006 Introduction: Chess of the Red Propaganda

486 Between Heaven and Earth. Match for the Title of Soviet Champion: