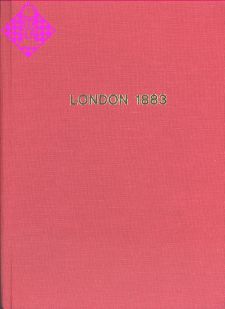 "When the Committee entrusted to me the task of publishing the Collccted Games played in the International Chess Tournament of 1883, I was determined that no labour should be wanting on my part to place the book in the hands of subscribers before the close of the year. Owing to the assistance which the funds at their disposal enabled the Committee to provide me with, the rapidity of execution, as well as the interest of the work, has been greatly increased, and for the first time in the annals of Chess Tournaments the Collected Games will be published within five months of the close of play, I trust in time to revive the interest in the struggle which a longer lapse of time would have necessarily effaced.

It is needless for me to point out the greatly enhanced value given to this collection by the elaborate notes to their own games which the two first prize-winners, Messrs. Zukertort and Steinitz, have supplied. Both these masters have brought the art of Chess analysis to a perfection unknown before their time, and never have they exercised it more successfully than in this collection. It was a labour of love with both of them to show that they stood as unrivalled in this branch of Chess as in their synthetical powers of combination over the board.

To those who may think that these masters of analysis are almost too exhaustive in their treatment the notes by Messrs. Bird and Mason will give all that can be desired, and the reader will notice that I have in no way attempted to create homogeneity in the opinions put forth, but have left each master quite free to set forth his own views. The opinions of Mr. Bird on some points of Theory are well known to be heterodox, and the reader may be amused at finding such opposite views propounded within one volume as will meet him in this collection. I can only suggest to the young student that on all questions of Theory he will find Zukertort and Steinitz thoroughly safe guides, while if he attempt to put in practice some of Mr. Bird's opinions he must be prepared for difficulties only to be surmounted by that master's Chess genius and originality.

To all the above gentlemen my best obligations are due for their zealous co-operation and the deterimination which each of them has shown to make this Collection of Games worthy of the occasion.

As regards tlie Games annotated by myself, the reader must acquit me of presumption in having performed a necessary duty. I need not say that I have made no attempt to imitate the great masters of analysis, and have contented myself with such remarks as would clear up possible difftculties for young players, and enable them to take appreciative interest in the recorded play. My best thanks are due to my friend Mr. Wayte not only for his valuable assistance in annotating Tchigorin's Games, but throughout the preparation of this volume. There is no living amateur more thoroughly acquainted with the latest Theory of Chess, and his notes in this respect will be found of the highest value.

I regret that the Collection of Games played in the Vizayanagaram Tournament is not more complete, but no ofacial copy of the Games was recorded, and I am chiefly indebted to the players who have been kind enongh to supply ine with specimens of their skill. A mass of incorrectly-recorded Games was handed over by some of the players to the Director of Play, and my best obligations are due to my friend Mr. Gattie for the zealous labour with which he worked at this " indigesta moles," and rescued from oblivion the majority of the Games which appear in this selection. I fear that some of the best-played Games in this Touraainent have been lost, but those I have been able, with Mr. Gattie's help, to preserve, will form, I trust, a not unworthy portion of the memorable Collection of Chess Games in which they appear.

The careful notes prepared for so many of these Games by Mr. Gattie will speak for themselves, and I can answer for them as full of valuable instruction for younger players.

A few Games in this Collection have been taken, with notes by the Rev. C. E. Ranken, from the British Chess Magazine.

The reader will find the mark of admiration (!) and of interrogation (?) to mark a fine move, and a doubtful or bad one, used freely throughout the Collection, as these marks often obviate the need of any extended comment. The neophyte must not be surprised to find that even the greatest masters sometimes make a very bad move ; they would not be human if this were not the case.

The London 1883 tournament is remembered as the place of one of the most beautiful played games and well the game between Zukertort and Blackburne,London, 1883 1.c4 e6 2.e3 Nf6 3.Nf3 b6 4.Be2 Bb7 5.0-0 d5 6.d4 Bd6 7.Nc3 0-0 8.b3 Nbd7 9.Bb2 Qe7 10.Nb5 Ne4 11.Nxd6 cxd6 12.Nd2 Ndf6 13.f3 Nxd2 14.Qxd2 dxc4 15.Bxc4 d5 16.Bd3 Rfc8 17.Rae1 Rc7 18.e4 Rac8 19.e5 Ne8 20.f4 g6 21.Re3 f5 22.exf6 Nxf6 23.f5 Ne4 24.Bxe4 dxe4 25.fxg6 Rc2 26.gxh7+ Kh8 27.d5+ e5 28.Qb4 R8c5 29.Rf8+ Kxh7 30.Qxe4+ Kg7 31.Bxe5+ Kxf8 32.Bg7+ Kg8 33.Qxe7 1-0 Steinitz wrote later “Words are insufficient to express the admiration of the mastery with which Zukertort conducted this game. But the whole tournament was a fantastic success for Johannes Zukertort who defeated there in London nearly every leading chess player in the world, where the great Steinitz was only second. After this, Zukertort was widely regarded as the unofficial World Champion and went home with 250 GBP. The editor James Minchin wrote: Until this breakdown Zukertort had achieved a record hitherto unattained in the annals of chess tournaments by winning twenty-two games to one defeat, and shown in the performance that combinations of brilliancy, energy, and accuracy which, against such competitors, could alone have attained such a result. His game against Blackburne in the first round is the finest that has been played in the time of the present generation of chess players, and proves, if any such proof be wanting, that magnificent combination is superior to that dull chess strategy which risks no attack and struggles pertinaciously to obtain an extra pawn on the Queen’s side against the end-game.The stratagem is as sound as it is brilliant, and when Zukertort played his Rook to K3 he had the whole combination, twelve moves deep, clearly in his mind - a combination not be surpassed in all the recorded games of the brilliant masters of the past, Morphy and Anderssen.Zukertort enrols himself in the modern school of strategy versus combinations. The tournament was a complicated 14 player double cycle play where the draws had a strange way of counting draws. Interesting to mention are the describing of the players as Mr Bird,as is known to all,has peculiar ideas in the opening; he believes in a form of the Giuoco for the attack, which is in fact the same as the Evans refused, supposed by all other masters to be favourable for the defence. He certainly won a fine game at this opening from Rosenthal,and in his hands exceptional attacks and defences often turn out successful. Pleasant to mention is that the games are annotated by the players themselves and that makes a rare tournament book like this one very special. Altogether this tournament book carries 296 annotated games. Conclusion: A remarkable reprint! With kind permission of the author John Elburg (www.chessbooks.nl)