The Story of the Great Match ...
Eigenschaften
Vergriffen 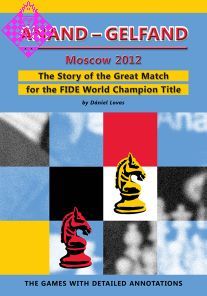 Anand has defended his world title again, and now our series is continued. According to public reaction, our previous book recording the chronicle of the 2010 Anand-Topalov encounter in Sofia was well received by the friends of chess. Here is the sequel, similar both in form and content: the chronicle of the 2012 Anand-Gelfand World Chess Championship match held in the Tretyakov Gallery in Moscow. It is presumably well-known to every reader that Anand won 8 1/2 : 7 1/2, defending his world title. But to the final an adventurous path was leading. On the pages of this book, I make an attempt at recalling the story of the match as attractively as possible. To assist the better understanding of the memorable 16 games, detailed annotations are enclosed, which, in addition to the analysis of the variations, also touch on the role tournament tactics and moral factors played in the forming of the result.