The inside story of the controversial ..
Eigenschaften
Vergriffen 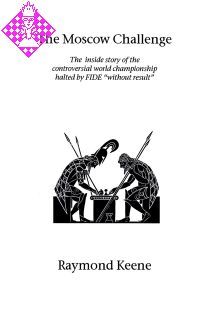 Moscow, in the autumn of 1984, was the setting for a clash between two of the all-time greats of chess: defending champion Anatoly Karpov, the most deadly tournament player in the history of the game, and Gary Kasparov, the 21 year old from Baku who would become the youngest ever World Champion were he to overthrow his rival. This gruelling test of contrasting character, style and sheer physical reserves roused a wave of media interest and thrust chess into the forefront of public attention. The press had this to say during the match: If Karpov wins this match, it will be taken by the Russians as a clear sign that all is well with the Soviet state, that the virtues of hard work and conformity with the system are still valid, and that, in the game of war as in international relations, Moscow stands supreme - David Spanier, The Standard; Kasparov is seen by some Soviet officials as arrogant and cynical, although others merely regard him as self-assured and individualistic. He is driven by the ambition to become World Champion, three years earlier than Karpov did - Richard Owen, The Times ;The eventual victor may be the Russian winter. The battle of attrition to score the required six wins could continue long into November and December. - Leonard Barden, The Guardian.

However, the devastating form of the World Champion in the early games, during which he took a 4-0 lead, left the chess world wondering whether the challenger could recover... In this book Grandmaster Raymond Keene annotates all the games and provides a penetrating analysis of the respective styles and personalities of both Champion and Challenger.

Raymond Keene is a British Chess Champion, and the first British Player to achieve a FIDE (World Chess Federation) Grandmaster norm. He was awarded the OBE for services to chess in 1985. He is Chess Correspondent of The Times, The Sunday Times, The Spectator, and The International Herald Tribune. He is a prolific author of chess books, several of which are classics of the genre. He has organised three World Chess Championships.

6 Who was the Greatest?