The store will not work correctly in the case when cookies are disabled.
Artikelnummer
LXBERWCCM01
Autor
Igor Berdichevsky 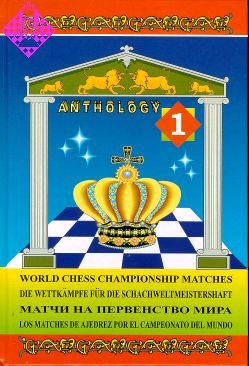 This three-volume anthology contains the collected and annotated games of all the matches for the world chess championship between 1886 and 1998.

In the overwhelming majority of cases, these matches were battles between genuine chess giants. In 1947 the organization of the world championships, including qualifying competitions, was taken on by the International Chess Federation (FIDE). This strengthened both the prestige of the title itself, and also the prestige of FIDE, which competently arranged these events for half a century.

Among the games presented in this work are a number of genuine masterpieces, the study of which will afford great pleasure to lovers of the game. It can be confidently stated that this publication gives the most vivid impression of the state of chess skill and chess knowledge at various stages in the history of our game throughout the last hundred years. Such material cannot age and cannot be consigned to oblivion.

In the present rapidly changing world, it has to be considered how best to continue and develop this old tradition of determining the best chess player in the world. It so happened that, like it or not, the previous system needed to be radically revised. It had both virtues and drawbacks; in the end its drawbacks - lack of commercial appeal and difficulty in providing a worthy remuneration to the participants - played their part, forcing new paths to be adopted. This is why this three-volume anthology is both in the nature of a report on what has been done up till now, and also an expression of our deep respect and admiration for great players, who have held the title of champion since the time when it was established.

The very first match for the world chess championship was held in three U.S. cities: New York, St. Louis and New Orleans. No organization existed then that could have declared its right to arrange such competitions on a regular basis, but nobody disputed the legality of the title when Steinitz won it...

Champions used then to choose opponents for themselves, but this was not a great Problem for the chess world, as public opinion was fully respected. In this match all the games except one ended in a win for one side or the other - unbelievable! Steinitz fell behind again at the Start, but later he appeared to find the key to his adversary.

Gunsberg won a strong tournament in New York shortly betfore the match and he also had a drawn match against Chigorin to his credit. He turned out to be a difficult Opponent for Steinitz, achieving a plus score after five games and resisting very hard till the very end.

Steinitz had to solve a difficult problem: whom should he play? Tarrasch claimed his rights, but in a very unpolite way, and so Steinitz, who was then 56, preferred another match against Chigorin. He was on the verge of losing this time, and so it became clear that the next match would probably give the chess world a new Champion.

The fight was even only at the beginning: 3-3 after the six games in New York. After they had moved to Philadelphia, Lasker won five games in a row, and the finish in Montreal could not change anything. The unique 27-year period of Lasker's domination followed.

Seven losses and four draws in the first eleven games confirmed the obvious fact: Steinitz could no longer demonstrate his former strength. A 10-year break in world championship matches now followed, during which only Tarrasch was regarded a worthy Opponent for Lasker, but for some reason their duel occurred much later.

After the break, the first to make an attempt to win the chess crown was Frank Marshall, the winner of the great tournament at Cambridge Springs (1904). His compatriots wanted to see him on the throne and they collected the funds required, but Lasker simply devastated his Opponent.

When Tarrasch finally got his chance to contest the title, his best years had already passed. He played in many tournaments after this match, but achieved no notable successes. It is hard to say who was more unfortunate - he, or, for example, Nimzowitsch or Rubinstein, who did not play a match for the title at all.

Janowski was a brilliant player, and he played beautiful chess, with many sacrifices, l but most important - he had a wealthy patron. This fact meant a lot, and it explains why Janowski had the honor of playing two matches for the chess crown. For Lasker, however, he was not a tough enough Opponent.

There were many contradictions associated with this short match, and much \ discussion revolved around the question of what would have happened if Schlechter had drawn the last game. A version of the match regulations existed where it was said that, to win the title, the challenger had to achieve a score of plus 2 rather than the usual plus 1. If so, a draw in the last game was equivalent to a loss for Schlechter.

Their first match seemed to have answered all possible questions, and Lasker apparently played this second match as if fighting against himself, trying to prove that a a more convincing score could be achieved. Incidentally, Lasker was reproached for playing Janowski again - there were more deserving opponents around.

The First World War destroyed normal chess life for many years. However, it did not affect Capablanca - the Cuban genius, the winner of many strong tournaments. He lived in the U.S.A. and had no problems. The aging Lasker, being in tight circumstances, agreed to play in Havana, and complained about it later. But, to be honest, Capa was simply stronger at that time...

Everyone was sure that Capablanca would beat Alekhine, except for the challenger himself and a few of his friends: Alekhine had not won even a single game against Capa prior to the match. Their duel was extremely close, it was necessary to win six games, and a record was established for the length of this type of event. The winner was the player who was both a genius, and a hard worker.

Two Russian matadors, one with a French passport, the other with a German one, travelling through Germany and Holland, playing a match for the world championship...

The contest was very interesting for its chess content: Alekhine was very much the stronger of the two, but he had to make full use of his powers in order to beat his Opponent.

Their second match was also not very interesting as regards its result, and it remained in the history of chess mainly for its games. Alekhine's domination then over his main rivals was at times simply overwhelming.

Euwe did not expect to win this match, but hoped to offer a tough resistance and nothing more. His friends, however, had another opinion: they saw that Alekhine's play had deteriorated and that his nerves were not as strong as before. Alekhine also assisted his Opponent: first, he underestimated Euwe, and when he was losing he failed to show his best form.

The convincing revenge in this match gave rise to a joke - "Alekhine simply loaned his title to Euwe for two years". Alekhine regained the crown and held it until his death in 1946. The Second World War also contributed to this fact, and what happened thereafter was already the beginning of a new story.