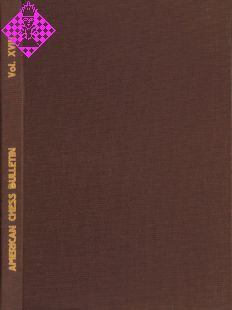 Sic transit gloria mundi! So said a retired Lasker, after losing 4-0 with 10 draws to capablanca in Havana, and resigning the world championship. The ACB's old co-editor Hartwig Cassel is in Cuba to record the match (which had an unprecedented purse of 25.000), and the subsequent celebrations. The new champion pens his classic Chess Fundametals and engages in negotations to play Rubinstein, whilst back in the States Edward Lasker is impressed with the play of prodigy Sammy Reshevsky, but points out the only thing the child has to learn is to lose gracefully. 306pp.