The store will not work correctly in the case when cookies are disabled.
Artikelnummer
LZCITACM01
Autor
Josip Asik 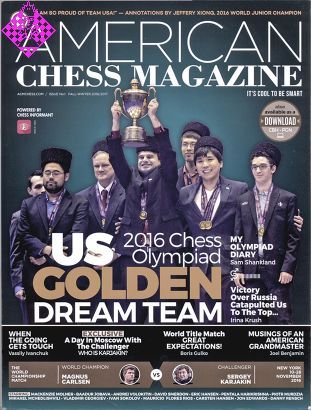 The American Chess Magazine comes to you at the end of 2016, on the crest of a wave that has provided the biggest boost to the US chess since the early 1970s, when Bobby Fischer claimed the world title from Boris Spassky.

A dream team of US grandmasters won the gold medal at the World Chess Olympiad, ahead of Ukraine, Russia, India, and over 160 other nations, while 15– year– old Texan, Jeffery Xiong, became the new World Under– 20 Champion! And now the ACM has been launched to help American readers keep in touch with all the most significant happenings in the exciting world of present day chess, both at home and abroad.

The international team that has in the last six years restored the legendary Chess Informant to its former glory, and more recently revamped the 135– year– old British Chess Magazine, has now been encouraged to celebrate the resurgence of US chess with the help of some of the finest American authors and editors.

Naturally, the success of the USA team at the Chess Olympiad comes under the spotlight in our first issue, as does Jeffery Xiong’s capture of the world junior title. There is also an in-depth preview of the forthcoming world championship match between Magnus Carlsen and Sergey Karjakin, to be staged in New York during November. Nevertheless, readers might be surprised at the number of contributed articles by writers from foreign lands. But here the ACM is only mirroring how dynamic and how global the chess scene is today.