The store will not work correctly in the case when cookies are disabled.
Artikelnummer
LZCRV0106
Autor
Ken Whyld 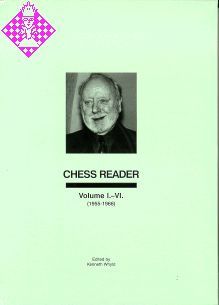 A magazine for chess bibliophiles is a ,,rara avis" in the chess world, but certainly there is a need for one since ,,Les cahiers de L'Echiquier francais" are no more issued. Therefore the intention to publish such a periodical in the English language deserves the support of all those who are interested in the secondary aspects of chess. Only he who is not merely alive to the practical game but also to the history and the literature of the game of all games, will fully undergo the fascinating influence it exercises on humanity for many centuries. May a great success be granted to Mr. K. Whyld to his new magazine.

Dr. Meindert Niemeijer, 1955 ...In the 1950s, Ken was busily collecting chess books. He began a magazine (The Chess Reader, 1955-63 and two later issues published by The Chess Player in 1965 and 1966) devoted to reviewing new chess books and during its lifetime he wrote over 500 reviews. This was not only a clever way of getting free copies from the publishers but it gave him an outlet for his writing skills.

This magazine is completely unobtainable, even on the secondhand market, which is a great shame as it means that Ken's beautifully crafted reviews are also unavailable. However, a reprint (minus the last issue) was recently circulated to members of the Ken Whyld Association and a full reprint is also now available.