The store will not work correctly in the case when cookies are disabled.
Artikelnummer
LZNICM1506
Autor
Dirk Jan ten GeuzendamJan Timman 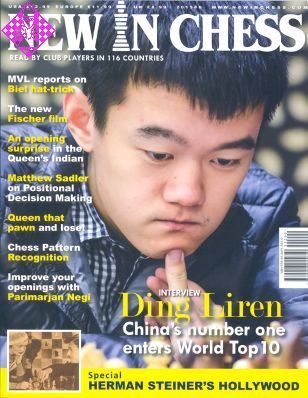 On silly online kibitzers and more

GM Michalchishin asks: would Hans Ree like to see Ivanchuk and Ponomariov (who got draft notices for the Ukrainian army) killed?

Earning the GM title at 15 is now almost commonplace

What F.Scott Fitzgerald, Denis Diderot, Brian Sewell and others said about chess.

The story of a charismatic man whose legendary Hollywood Chess Group was only one of his contributions to American chess.

China’s number one, the third of The Three Musketeers, explains why he is (not) studying law at Beijing University, why no one has more potential than Wei Yi and how he beat Gelfand in their recent match in Wenzhou

An exclusive report with annotations by Bu Xiangzhi and Shen Yang

How good is Tobey Maguire in the long-awaited movie Pawn Sacrifice? By Joe Ponterotto, author of A Psychobiography of Bobby Fischer

You proudly queen a pawn and then you lose. A masterclass by Contributing Editor Anish Giri

Nigel Short orders a beer in Cape Town that is specially brewed ‘for freaks, gypsies and international chess superstars’

Parimarjan Negi explains how to avoid the opening trap that almost every player falls into: trying to memorize moves

A crude and early attack in the Queens Indian

Matthew Sadler reviews ‘Positional Decision Making’ by Gelfand and Aagaard, ‘Meet the Nimzo Insian’ by Kasimdzhanov, ‘Power Strategy’ by Marin, ‘The Ragozin Defence’ by Ramirez and ‘Chess Endgames for Kids’ by Müller

Hans Ree on grandmasters that cry.

Jan Timman looks at the key games of the Politiken Cup and shows highlights from his lecture on endgame studies.

What was the best game Radoslaw Wojtaszek ever played?
Mehr von New in Chess