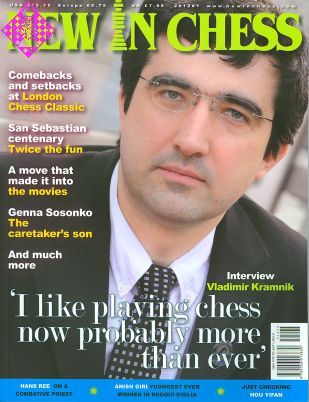 In the third edition of the London Chess Classic, the English players had a hard time of it. At the end of nine hard-fought rounds, the total score between 'the World' and 'England' was a telling 15-5. A prominent part in the massacre was played by overall winner Vladimir Kramnik, who notched up a clean 4-0 against the hosts to mark an inspired comeback after his poor result in the Tal Memorial.

The former World Champ speaks openly about his ambitions, the incredible stability of Magnus Carlsen, the upcoming Anand-Gelfand match, his attitude towards Garry Kasparov, the political situation in Russia and much more.

042 A Move that Made it into the Movies

Mihail Marin unravels the mystery of a star move that had a brief film career.

050 Two Games and Twice the Fun

Celebrating the legendary tournaments of 1911 and 1912, the San Sebastian New Year's festival introduced the 'Basque System', a knock-out format in which every round consists of two games played ­simultaneously, one with the white and one with the black pieces.

Nigel Short muses about the effects of advancing age on a chess player.

Of all the World Champions, Tigran Vartanovich Petrosian is perhaps the most underrated. Genna Sosonko remembers and portrays the legendary Armenian, a complex character with a fabulous talent for the game.

078 The Art of the Composer

A film, a book and the fate of books in general inspired Hans Ree to some rambling observations.

Jan Timman closely followed the events in Reggio Emilia. 'You could feel the ambition bubbling from the very start.'

What is Hou Yifan's greatest fear?