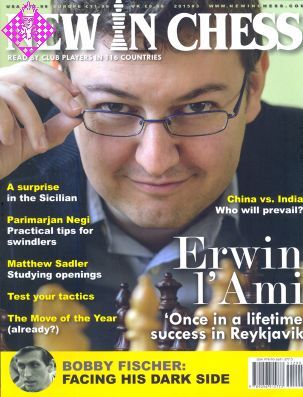 Dirk Jan ten Geuzendam argues that only by separating the person from the chess genius can we embrace the legacy of one of the greatest and most inspiring champions our game has ever seen.

In a personal account the winner of the Reykjavik Open relives 'the best two weeks of my chess career'.

An SOS solution to 2.b3 against the Sicilian.

A swindler never gives up!

Genna Sosonko looks at the options.

The powerhouses of the future met in Hyderabad. China beat India 18-14.

068 Kasparov on the Warpath

Evgeny Tomashevsky looks poised to qualify for the Candidates' tournament.

Matthew Sadler looks at both ways to study openings.

Jan Timman and Denis Khismatullin on the Move of the Year (probably).