and Other Thoughts
Eigenschaften
Vergriffen 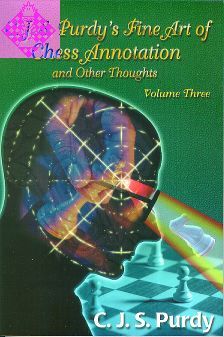 Cecil John Seddon Purdy was a bona-fide original thinker, explorer, and discoverer, much like the late physicist Richard Feynman. Besides

writing about and playing chess, he thought about origins, its rules, and its best games by its best players-and sometimes he would disagree with the results of others. Genius does what it wants, and it often suffers as a result.

However, the rewards of his insightful genius are now bearing fruit and a whole new world has discovered the writings of this master teacher and player.

In 1953 Purdy became the First Correspondence Chess Champion Of The World-in a notoriously difficult sport-while residing in Australia! Concurrently he was also publishing his small, but powerful, chess magazine, aptly named, Chess World.

Volume 3, continuing in the same style contains 70 annotated games of CJS Purdy as well as an additional 30 annotated games of his tactically gifted son John, also an Australian Champion. In addition, 6 articles and a number of essays add to the flavor of learning, such as: The Road to 2000; Psychoanalyze Your f-Pawn; How to Plan; The Element of Chance in Chess; and How to See Combinations.

Besides the many diagrams, there is an index of openings, and information on the Purdy Library of Chess.

Dr. Ralph J. Tykodi, compiled the games and articles for all the recent Purdy projects. He and his wife Lois live in Massachusetts.

223 Purdy Observations (The Nature of Chess)

232 A Lesson on "Pawn Islands" and Blockade

244 The Element of Chance in Chess

248 How to See Combinations

252 The Purdy Library of Chess