Chess in the Movies 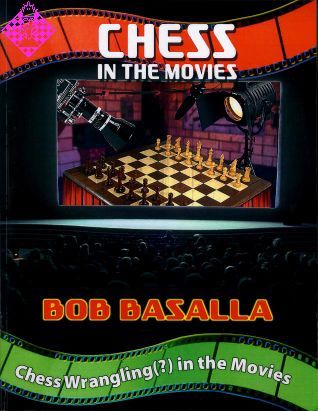 Crazier than an outburst from an exiled World Chess Champion! It's all here, entertainment and fun about one of everyone's favorite topics - movies - only this book on flicks is about how chess is used and abused as a "prop/plot."

Sure there are great movies such as The Thomas Crown Affair, The Most Dangerous Game, The Seventh Seal, and The Bishop Murder Case. But, there are also some lulus from terrible movies, science fiction, documentaries, and anachronistic playing styles (would you believe the ancient Romans?).

Dentist, chess guy, and film buff Bob Basalla goes through more than 2000 movies to find the howlers, the silliness, and some of the most amazing conversations you wish you had never heard.

There are funny movies (Blazing Saddles), sad movies (Death Be Not Proud), foreign movies (Les Creatures), and chess movies (Chess Fever). The range is nearly endless with Sherlock Holmes playing chess (although he never did), to outer space, war, and romance.

Unfortunately, many directors get it wrong. There are illegal moves, checks that aren't checks, positions that are impossible according to the rules of chess, and plots that are off the charts (or in this case, the chessboard) with continuity problems being tougher than chess problems. If the positions of Fischer's "Random Chess" look startling to you, you haven't seen anything until you see what the people in Hollywood have designed.

Many alternate and foreign titles are given as well as the names of directors and main actors - for chess for show, chess for real, and chess for weird. Over 200 diagrammed board positions.