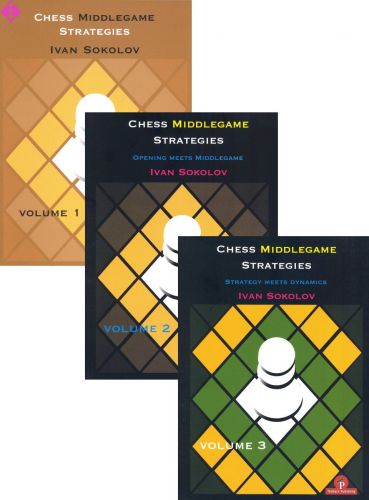 After his outstanding book from 2008, "Winning Chess Middlegames", Grandmaster Ivan Sokolov takes us a step further into his dungeon of middlegame skills. In his well known style and entertaining book, he focusses on the different aspects of the complex middlegame.

As usual Ivan breaks new ground and provides us with a varety of instructive examples. Many were extracted from the very recent top level tournament practice. Volume 2 will be published later in 2017.

'Winning Chess Middlegames" - written 9 years earlier - and its German language translation bear no resemblance to this new work. In 'WCM' the material is divided in 4 chapters according to 4 basic pawn structures, while in the author's recent work (9 chapters) only chapter 4 'minority vs majority' is set along the pawn structure lines (not being dealt with in the previous work). 'Chess middlegame strategies' deals with 'strategies' not 'pawn structure based' - Simply a very different work.

Ivan Sokolov was born in Bosnia in 1968. He was and still is one of the most flamboyant attacking players of his time, reaching several times, over a period of 13 years, the top 12 spot in the FIDE ranking. He notably has beaten world chess champions like Smyslov, Kasparov, Kramnik, Anand and Topalov. We remember him winning most recent the World Open in Philadelphia 2012 and the gold medal for best performance at the "European Teams" in Warsaw 2013. He is a successful writer with bestsellers as "Winning Chess Middlegames", "The Ruy Lopez Revisited", "The Strategic Nimzo-Indian" and "Sacrifice and Initiative".

His colums in the last Chess Informants are also widely appraised. This is his second book for Thinkers Publishing after he published his biography "Ivans´s Chess Journey". He is currently beeing employed in Iran as a national team coach.

Ivan Sokolov was one of the most feared attacking players of his time, reaching several times the World top 12 ranking over a 13 years time span. His dynamic style brought hirn numerous tournaments victories including, with a classical time control, wins versus no fewer than six World Champions. During the last couple of years Ivan focused on coaching and writing. On the 'Middlegame' theme Ivan already wrote 3 acclaimed bestsellers being "Winning Chess Middlegames', "Sacrifice and Initiative" and "Chess Middlegame Strategies" Vol. 1 (Thinkers Publishing 2017). In his second volume he explores middlegame strategies and ideas related to prospective opening set-ups.

In this book I have taken strategic themes from specific openings and combined these with standard strategies such as the open file, space or flexibility. Indeed, the subtitle for this book is “Strategy Meets Dynamics” and that is a good definition of what this book is about.

The book contains 43 annotated games divided among seven chapters. Within these pages you will find strategic plans related to typical pawn structures arising from the Geller/Tolush Gambit or the Anti-Moscow Gambit. By taking the time to study those chapters you should come away with a deeper understanding of the subtle nuances in pawn structures and the dynamics that arise. In addition, you will learn different strategic/dynamic ideas and this will strengthen your practical play in such positions.

The chapter on ‘Karpov’s King in the Center’ is where you will be surprised at how often the 12th World Champion, playing Black no less, deliberately gave up the right to castle. Not only will you gain perspective on when you might wish to leave your king uncastled you will also see how Karpov arranges his pieces so that each move is in harmony with those before and after the king move. Lastly you will improve your knowledge, from both sides of the board, of this particular variation of the Caro-Kann.

The open file theme is one that has been written on extensively. What I have tried to do here is show some modern approaches to this concept.

Perhaps the one dynamic theme that often amazes players is the exchange sacrifice. I have included no less than 11 annotated games in this chapter sorted by the different objectives that the player is trying to accomplish. There is plenty of knowledge to be absorbed by studying these games.

Finally, the work concludes with the daring, some may even say swashbuckling, aggressive g-pawn push! Th is aggressive move is used as a means to seize the initiative. I have laid this chapter out based upon opening variations and you may find it useful as opening preparation as well as ideas for dynamic play.

My aim in this book, as well as its two predecessors, is not only to help you improve your middlegame understanding but to give you new and different ideas/concepts to employ in your own play. In addition to the chess improvement that is offered I also hope that you will simply enjoy playing over the selected games.

009 CHAPTER I. KARPOV’S KING IN THE CENTER