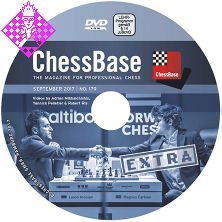 Adrian Mikhalchishin is always on the lookout for special ideas. He found one of these in a game by the young Efim Geller. In the Open Ruy Lopez, instead of restoring the material balance with the normal move 8.dxe5, he advanced his c-pawn to c4, where it is immediately doubly left hanging. Whether imitation of this can be recommended is explained to you in his video by the star Ukrainian trainer.

Yannick Pelletier had a catastrophic record against Ilia Smirin: he had lost all his games with Black. But in the 2016 European Cup in Novi Sad the Swiss grandmaster was in his best form: 6 out of 7 on third board, which also included a victory over the Israeli grandmaster - with Black!

In 1979 Mihail Tal was in outstanding form. Before winning the autumn interzonal tournament with a gigantic 14 out of 17, he was also triumphant along with Anatoly Karpov in one of the strongest tournaments of all time: Montreal. Robert Ris shows you Tal’s win against Spassky. In only 22 moves the magician from Riga completes a win with the black pieces.