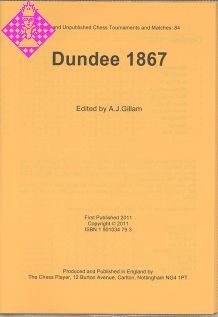 The information given here is taken from The Story of the Dundee Chess Club by Peter W. Walsh, 1984. The main highlights from the early story of chess in Dundee are:

1829 or before: the formation of the Angus Club

1847: the formation of the Dundee Chess Club

1848: the two clubs merged as the Dundee Chess Club

1851: the Dundee Club lapsed but the Angus Club was reformed, the President being G.B.Fraser

1851: the Angus Club played a correspondence game against Kling

1850s: G.B.Fraser played matches against Wormald, Falkbeer, Hannah and others

1860: the Dundee Club was reformed with G.B.Fraser as the Secretary/Treasurer

1862: the club bought one hour sand-glasses for timing; the first club championship was held; G.B.Fraser won and later gave an 11 board blindfold simul

1862 August to 1864 April: G.B.Fraser wrote a weekly chess column in the Courier and Argus

1864: Pindar, one of the leading English provincial players, joined the club

These activities had made the Dundee Chess Club, led by G.B.Fraser, the most active in Scotland. This, plus a financial contribution, resulted in the London-based organisation, the British Chess Association, agreeing to hold its 1867 tournament in Dundee.

Some of the information about the tournament conditions comes from the book mentioned above and some from the Transactions of the British Chess Association 1866/1867 which also contains a large selection of games from the main event.