The store will not work correctly in the case when cookies are disabled.
Artikelnummer
LXLISFPC
Autor
Tomasz Lissowski 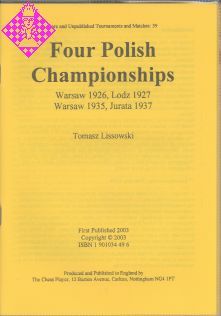 During the 19th and 20th centuries the territory of the old and greater Poland-Lithuanian Commonwealth, divided between the three powers: Russia, Austria and Prussia, produced a large number of excellent chess players: Zytogorski, Winawer, Zukertort, Rosenthal, Janowski, Rubinstein, Tartakower, Przepiorka, Najdorf, Reshevsky, and others, less well known. It happened that at the junction lines, where Jewish, German, Polish and Russian culture met, despite the wars, insurrections, deportations, rebellions and pogroms, the royal game evolved and blossomed, winning new adherents in every generation.

Reunified (hi 1918), Poland couldn't contribute much to its chess clubs in terms of finance; many more important problems existed. Nevertheless, the Polish Olympic team was one of the strongest in the world in the years 1928-1939; only the Americans and perhaps the Hungarians were more successful in the Tournaments of Nations.

Four Polish Chess Championships, played in the interval between the first and second World Wars, failed to be crowned with a tournament book. There were, among their participants, genuine amateurs, mediocre professionals and stars of a Different scale. The majority of games, unfortunately, are lost forever. The rest, and we believe, a selection of the best games, were preserved in old chess columns, magazines and books. The ruthlessness of history has determined that these game scores are now almost the only reminder of those former heroes; in some cases, the only reminder. These games we would like to present, with some necessary notes, and - as a rule - with original comments, to our readers.