The store will not work correctly in the case when cookies are disabled.
Artikelnummer
SCOZHOFOCO
Autor
Qiyu Zhou 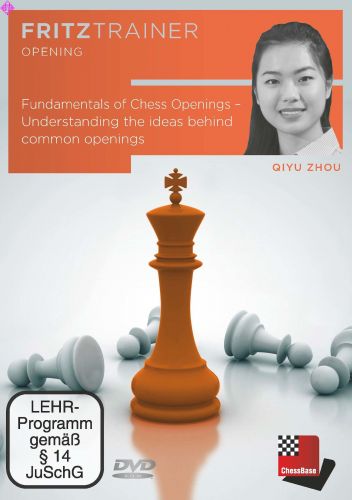 Openings may seem daunting, after all, with all the material out there on openings, what should you read or watch? Well, you can start with this DVD because I’ll teach you all about the basics which apply to practically every single opening! Have you ever wanted to learn openings without the hassle of memorizing variation after variation? Do you just want to understand why you make the moves you make?

Then this is the DVD for you! Starting out in chess is difficult, and this DVD aims to reduce that stress. Designed for beginner levels in openings, I hope to give a brief introduction to the reasons we play some of the most common moves in popular openings like the Spanish and Sicilian. Focusing exclusively on the two most popular first moves, 1. e4 and 1.d4 openings, this DVD can be used for both white and black. Aside from covering specific variations, I have also included the basic rules of openings we should all follow, such as controlling the center, developing towards the center, and much more!

WGM Qiyu Zhou , born in 2000, is a Canadian chess player who has competed for team Canada at the Women’s Chess Olympiad since 2014 and who won the Canadian women’s championship in 2016.

Why you don’t move the queen a million times

Why you should put development first

How do we get a strong center?

Control of center and then attack on flank

Another way of preventing castling