The store will not work correctly in the case when cookies are disabled.
Artikelnummer
LXGILGHE1923
Autor
Anthony J. Gillam 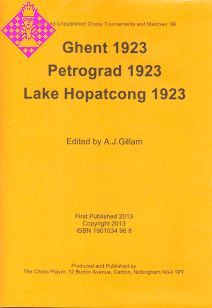 The three tournaments in this book are the remaining strang events of the year. The Belgian Championship is important for the standard of play which Colle and Koltanowski later achieved rather than for the standard they were playing at in 1923.

I am grateful to Henri Serruys of Antwerp for his assistance with the games of the Belgian Championship and to Eduardo Bauza Mercere of New York, for similar help with the Lake Hopatcong tournament.