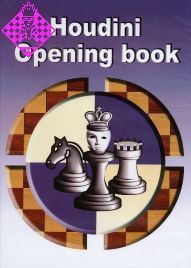 Houdini Opening Book provides latest chess theory approved in millions of advanced chess games and matches of top human players. It includes over 70 million positions. Houdini Opening Book was developed especially for Houdini, but can be used with any other engines in the Aquarium interface, and also be used in the other interfaces (such as Fritz) via Aquarium Book Adapter , included in this DVD.Houdini Opening Book is a thoroughly researched and up to date collection of modern opening lines. It can be used as an opening book in chess engine matches , an opening guide in correspondence chess , as well as a source for general opening studies and tournament preparation by players of all levels. As a special bonus from ChessOK , the book includes chess trees (positional databases) containing computer evaluations of the moves in the book and statistics showing their popularity in human games and in correspondence play. The trees also show changes to the popularity of moves in the past year. The book is specially designed to use all the advantages of navigation in multi-column tree view of Aquarium GUI . The author of the book is Roger E. Zibell .