The store will not work correctly in the case when cookies are disabled.
Artikelnummer
SOGARICS
Autor
Timur GareevRonen Har-Zvi 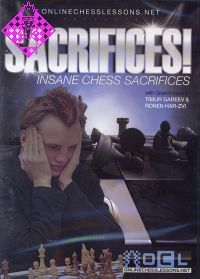 If you want to win more games, you have to attack your opponent and can not be scared to sacrifice to break through with an attack. There are an overwhelming variety of sacrifices and reasons for making sacrifices - you could give up a pawn to seize the initiative or gain space, you could sacrifice an exchange to change the dynamic of a position, or you could make a positional sacrifice by allowing doubled, isolated pawns but gaining a dangerous attack against your opponent's king. Understanding the many types of sacrifices, and what types of positions are good to sacrifice from, is critical if you want to improve your game. In this chess DVD, Grandmasters Timur Gareev (2680 FIDE) and Ronen Har-Zvi (2515 FIDE) explain particularly impressive sacrifices by leading GMs Judit Polgar, Emil Sutovsky, Hikaru Nakamura, Dragoljub Velimirovic, and Artur Yusupov.

"We cannot resist the fascination of sacrifice, since a passion for sacrifices is part of a chessplayer's nature" Rudolf Spielmann