The store will not work correctly in the case when cookies are disabled.
Artikelnummer
LOSCIHTPKA
Autor
Eric Schiller 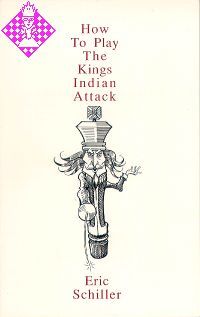 Players seeking a flexible system for White should consider the King's Indian Attack. White plays the same opening moves against most Black continuations: Nf3, g3, Bg2. Typically, a wide range of middle game positions may arise. The basic concepts are fairly easy to learn, making it a very suitable opening for the developing player. The theory does not change as rapidly as many other lines. This work emphasizes explanation, rather than extensive analysis of variations.

The King's Indian Attack is essentially an opening of ideas rather than variations. White adopts a formation which is usually employed by Black in the King's Indian Defense. He deploys his forces rapidly, fianchettoing his Bf1 and castling kingside. His stake in the center is his pawn at e4, which is supported both by a pawn at d3 and a knight at d2, often with rook or queen providing added security along the e-file. His basic plan is to attack the Black king, which inevitably finds itself on the kingside, as there is never a safe haven in the center, which White can usual open up, or on the queenside, where the Bg2 can join the attack after a further advance of the e-pawn.

For the most part, White can adopt a consistent middlegame strategy regardless of Black's choice of defensive formations.

The basic idea of the King's Indian Attack is by no means new and was seen in the last century, as the following examples show.

It was not a popular opening in the early part of the present century, and remained fairly obscure until Bobby Fischer adopted it as a significant part of his arsenal.

There are a number of methods of reaching King's Indian Attack positions.

White can play 1 e4 and then 2 d3, followed by Nb1-d2, Ng1f3, and then kingside fianchetto and castling. This is the best method, in my opinion, because it avoids lines where Black plays an early d7-d5, develops his light-squared bishop on the kingside and then erects a fortress with c7-c6, e7-e6 etc. It also avoids Dutch formations with an early f7-f5. The only drawback to the use of 1 e4 is that Black can play 1...e5, after which the King's Indian Attack is not the most aggressive choice for White by any means. Yet even here, in a sort of reversed Philidor Defense, White's strategy is fully playable.

The next best move order is 1 Nf3, followed by 2 g3, 3 Bg2, 4 0-0 etc. White will, eventually, be able to play e2-e4 but Black has a much wider range of defensive options and consequently White will be responsible for knowing a greater amount of opening theory. After 1...Nf6 Black will be able to play a queenside fianchetto which will limit the power of the Bg2.

1 g3 is yet another way of reaching a King's Indian Attack, but here Black can play 1...e5! and obtain a powerful center. Then White can adopt a Modern Defense with a tempo in hand, a reasonable option but one which lies outside the scope of this book.