Semi-final of the 29th USSR Championship 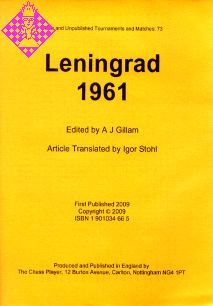 The games in this book were taken from one of five copies of a typescript in Latvian which contains: the draw, various cross tables, the games, a list of pairings and results at the beginning of each round, a player index, a listing showing which games were published in the various Soviet magazines, a statement that only five copies were produced and an extensive list of corrections. Nothing more. Unfortunately, a number of the game scores contain additional errors some of which I have corrected but others defy explanation. In those cases the moves, as typed, have been reproduced here. Spassky went on to win the 29 th USSR Championship later in the year.

The article which appears here was published in Shakhmaty v SSSR in early 1962.

It isn't easy to establish a definitive cross table for this event. The one that appears here is based on the games, results and brief comments that appear in the Latvian script. The problem centres round the treatment of the scores of the players that did not complete the tournament. It would seem that Cherepkov's scores were cancelled and those games not played by Blechtsin were defaulted. This would be in accordance with normal practice. However, one other game was awarded by default and then there are a further couple of queries!