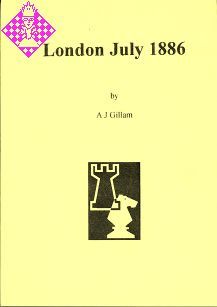 Fortunately, these many sources yield large numbers of games and notes and it is my intention to collect them and to publish all of these events, and also London 1872 and 1876 and perhaps others.

The tournament of July 1886 was organised by one of the many groupings in British chess of the period, the British Chess Association. It was held at the Victoria Hall, Criterion - the same hall as the London 1883 tournament. This hall still exists at Piccadilly Square, London, on the first floor (second floor to Americans!) and is presently occupied by a restaurant. In 1886, it was also the clubroom for a major London chess club.

The tournament was covered extensively by the London daily papers. Reports appeared in the Daily News, Morning Advertiser, Morning Post, The Times, the Evening Standard and perhaps others. There was also, as you may expect, large coverage in the British Chess Magazine, The Chess-Monthly, and Chess Players' Chronicle and in the weekly press, especially The Field, Illustrated London News and Illustrated Sporting and Dramatic News. The French, German and American press also reported on the activities of their citizens.

Where clear errors occurred in press reports, these have been corrected or omitted. Other variations in game descriptions have been left in.

The time limit was twenty moves an hour but you will see from many of the times given that some players played much quicker than that. Some of the games were played so quickly that they seem to have been little more than skittles games.

This was Zukertort's first event after his loss to Steinitz earlier that year.