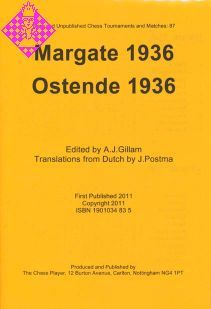 Five interesting international tournaments were held at Margate in Kent between 1935 and 1939.The last two events were published in Dutch and Spanish (reprinted in Argentina during World War 2) respectively, but not in English. The tournaments of 1936 and 1937 did not have a tournament book, although the games of 1937 are all available and it is my intention to publish them. The 1935 tournament was published as a Cordingley Limited Edition, with notes by Fred Reinfeld. This book unfortunately lacked 3 of the games and is now unobtainable. The 3 missing games are known and it is my intention to publish the complete tournament for the first time.

This book contains all of the available games of the 1936 tournament.

The Ostende 1936 tournament, which began only a few days after the end of the Margate event, had a complicated, probably unique, history as far as its publication was concerned. There was a tournament book, so rare that few people have seen a copy, but it only contains the first 5 rounds (25 of the 45 games)! The Belgian Chess Federation shortly afterwards began a publication called the Bulletin Officiel , which is now nearly as rare as the tournament book. They promised to publish the remaining 4 rounds in this publication, one round at a time. Number 1 duly contained Round 6 and number 2 had Round 7, and then no more. lt has thus been necessary to search chess magazines and newspapers for the last two rounds (10 games). About half of those games have been found.