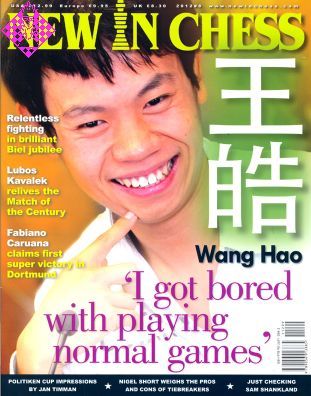 A wealth of fighting chess in the 45th Biel Chess Festival. Wang Hao’s six wins (three points per win), one draw and three losses (two against Carlsen!) resulted in one of the finest tournament victories in his career.

An unusual talent who has rediscovered his pleasure in the game and is happily facing the opportunities an unknown future has on offer.

Lubos Kavalek was in Reykjavik for the 'Match of the Century', both as a journalist and, in the second half, as Bobby Fischer’s second. Forty years on, he relives a most memorable chess experience.

With a clear first place in the Jermuk GP, the Women’s World Champion secured overall victory in the 2011-12 FIDE Grand Prix, confirming her status in today’s women’s chess.

Nigel Short looks at various tiebreakers and wonders if it makes sense to change the rules of the game.

In his new ground-breaking book Vladimir Tukmakov shows how you should prepare for your opponent in the Information Age.

082 Through the Luking Glass

Luke McShane has been reading books you may want to read too!

Does Sam Shankland have any ­superstitions concerning chess?
Mehr von New in Chess