The store will not work correctly in the case when cookies are disabled.
Artikelnummer
LZNICM1401
Autor
Dirk Jan ten GeuzendamJan Timman 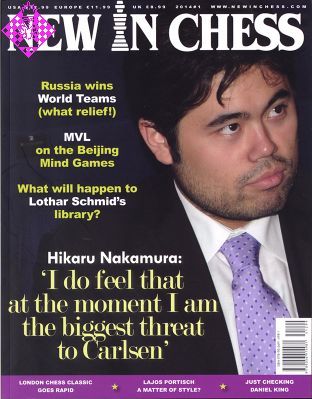 010 Carlsen Surpasses Kasparov With a stratospheric 2994 performance at the London Chess Classic, Magnus Carlsen raised his rating to new heights to break the old record of Garry Kasparov. The new summit of Mount Ever Best is 2861. Carlsen wasn’t the only star to shine in London. Vladimir Kramnik played ‘close to my best possible chess’ and remained in contention for first place till the very last day.

042 The Lone King The sponsor of the Anand-Gelfand match, Andrei Filatov, and Israeli GM Ilya Smirin shine their light on the troubled genius of Alexander Alekhine.

048 A Tale from 1001 Nights In Tashkent Sergey Karjakin, Alexander Morozevich and Wang Hao each collected 140 points in the second leg of the FIDE GP. In the fairy-tale surroundings of his native city, Rustam Kasimdzhanov played his best super-tournament ever.

066 Seven Pillars of Wisdom This time Nigel Short takes you to the United Arab Emirates and happily introduces you to the past and present of chess in the region.

070 Of Minds and World Cities Our new contributing editor Anish Giri reports on a two-week tour that took him to the Mind Games in Beijing and the World Cities Team Championship in Al Ain.

085 Who Leads the Deviation Dance? Luke McShane assesses the pros and cons of playing sidelines.

088 The Verdict Jan Timman announces the winners of the study tournament organized in honour of his 60th birthday last year. And presents their compositions.

094 Measuring Body and Mind Hans Ree imagines a future of chess as a biometric carnival.