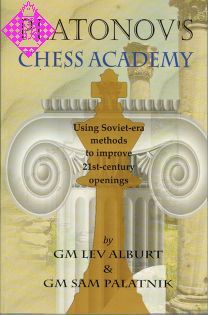 Igor Platonov was one of the most profound thinkers and theoreticians in the old Soviet Union, which held a grip on the world chess championship for decades as the title passed from one of its stars to another. Platonov's visionary insights, examined and explained here for the first time, provide you with the keys to understanding the foundational concepts of the game - and give you effective methods of training that will help you to find the most powerful moves.

Three-time U.S. Champion Lev Alburt and European Champion Sam Palatnik, two of the most renowned chess trainers in the world, introduce and explain the revolutionary ideas of their old friend and mentor, Igor Platonov.

008 Part I: Platonov's Methods in Action

026 Chapter Two: First the Destination, Then the Path

048 Part II: Platonov and the Sicilian

085 Chapter Five: The Breadth and Depth of Platonov's Sicilian

171 Chapter Nine: Warming Up for Your Tournament