The store will not work correctly in the case when cookies are disabled.
Artikelnummer
SCKINPP19E
Autor
Daniel King 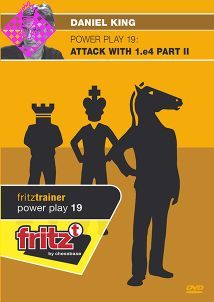 This DVD provides you with a repertoire of attacking lines against: The Scandinavian, Alekhine’s Defence, The Petroff, The Philidor, The Pirc, The Modern Defence (1. e4 g6). Many of these openings are very popular in club chess, yet they are often underestimated by players of the white pieces. Using his wealth of experience playing with 1 e4, Grandmaster Daniel King explains the openings and provides you with an aggressive system against each of them. This is the second part of Daniel King’s project ‘Attack with 1.e4’ (part I dealt with the Sicilian, the French, The Caro Kann and 1...e5). King’s recommendations aim to put your opponent under pressure right from the start of the game, and when players are under pressure, mistakes occur. This is a practical repertoire - if we study openings we want to be sure to use them in our games. After just a few moves, you will be dictating play.

Grandmaster Daniel King a professional chess player for more than 20 years. Besides his chess career, he has built up a reputation as a commentator on television, radio and the internet. He is also an award-winning author of more than 15 books.