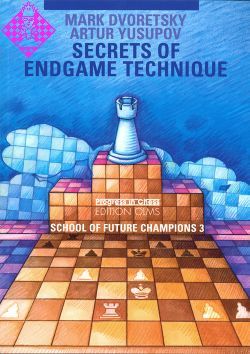 Successful endgame play is all about technique. In this third volume of the series the authors explain how to study the endgame and to analyse endgame positions, and illustrate the highly important technique of converting an advantage

This series of books is addressed to those who do not regard chess simply as an amusement, but want to understand its secrets more deeply and substantially raise their standard of play. How can this be achieved? What are the ways and methods of working independently on chess? That is what we teach in our school, and that is what is described in these books. We hope that you will derive benefit from them.

Perhaps, dear reader, you are already familiar with the first two books, based on material from the Dvoretsky-Yusupov school for talented young players (Secrets of Chess Training and Secrets of Opening Preparation). Then you will already know the main principles by which we are guided. We have held several thematic sessions of the school, devoted to a particular aspect of improvement in chess. The aim of the sessions was not to convey specific infor­mation - for this we had too little time. It was far more important to discover the deficien­cies in the pupils' play and to help them to eradicate them, to demonstrate the most effective ways of studying chess, and to acquaint them with general mechanisms, ideas and methods of play. You now have before you the third book (there are five in all). It is based on our work at the third session of the school, devoted to the problem of improving endgame and technical mastery.

During recent years the regulations for tournaments and matches have changed significantly - now games are hardly ever adjourned. Previously, after taking play into an ending, you could investigate its subtle­ties in home analysis, whereas now you have to act directly at the board. Without an excellent knowledge and, what is even more important, understanding of the laws of the endgame, it is not easy to cope with this task, especially if account is taken of accumulated fatigue from the preceding battle. And yet endgame mistakes are the last in the game - it is no longer possible to repair them! It is clear that today the importance of endgame and technical mas­tery has grown sharply.

In my bookcase there are numerous weighty tomes devoted to the theory of endings. Is it conceivable to assimilate and remember all the information contained in them? It turns out that it is not at all necessary to do this. After reading the first part of this book, you will see that 'your' system of endgame knowledge can and should be compact, easy to assimilate and remember, and you will learn how to develop it, by making the acquaintance of certain important sections of the theory of rook and minor piece endings.

The second part of the book is devoted to an analysis of complicated practical endings. Such an analysis helps to deepen and consolidate endgame knowledge, and aid the development of traits of character and thinking necessary to every player.

The technique of converting an advantage is a stumbling-block for many players. To raise your technical mastery requires developing in yourself certain important skills in seeking and taking decisions, moreover not purely chess, but, so to speak, 'psychological-chess' decisions. The question of how to improve your technique is examined in the third part of the book. Here are both the 'theory' of this question, and its practical application - both by a critical analysis of games played by young players, and at the very highest grandmaster level.

By tradition, the final part is devoted to an analysis of games by the pupils of the school.

This book was first published in the 1990s. During the preparation of this new edition I checked all the games and endings on a computer, which, naturally, gave rise to numerous improvements and additions. In addition, a quite large chapter has been added, one which was written many years after the first edition was published. In it some instructive examples of the successful or unsuccessful solving of complicated technical problems are analysed - they will help you to understand more deeply the technique of converting an advantage, a problem which is exceptionally important for every player.

Practically alt the players whom I have trained have possessed good technique and an excellent understanding of the endgame. This means that the working methods described in this book have stood the test of time. I hope that they will also prove suitable for you.

008 How to Study the Endgame (Mark Dvoretsky)

064 From the Simple to the Complicated: The Theory of Endings with Opposite-colour Bishops (Mark Dvoretsky)

102 Solo for a Knight (Artur Yusupov)

212 From Games by Pupils of the School (Artur Yusupov)

225 Index of Players and Analysts