The store will not work correctly in the case when cookies are disabled.
Artikelnummer
SCESHIEF
Autor
Alexej Schirow 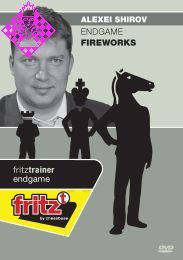 On this DVD Alexei Shirov shows that also in the endgame, it is possible to keep struggling for the full point to the very last - if you are creative and ambitious. Because even in objectively quite balanced positions, you can frequently find ways to sharpen up or complicate the fight. For the tournament player, often all that matters is to be able to pose practical problems which his or her opponent might finally fail to solve. Thus Shirov sees himself rather as an endgame practicioner, putting down his successes in this phase of the game less to concrete knowledge about theoretical positions than to the understanding of general principles, goodintuition and exact calculation of variations..

One main emphasis of the DVD is the endgame with rooks and different coloured bishops which Shirov finds particularly interesting,analysing five examples. Another important feature is the very complex and difficult setting with four rooks (three examples), where he works out mosthelpful general principles.

All in all, Shirov examines 17 examples out of his own practice, among them his famous different coloured bishop ending versus Topalov which went around the whole world.