The store will not work correctly in the case when cookies are disabled.
Artikelnummer
SCOSHISN6BG5
Autor
Alexej Schirow 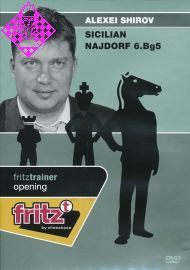 There are few opening systems which have been undergoing such a fast and furious renaissance as the 6.Bg5 Variation of the Najdorf System. Inspired by Radjabov's victories over Anand and Karjakin in 2006, a great number of games have been played since then, meaning that the theory has developed enormously. But even before then it stretched to such distant horizons that makes it all the more important to have someone who can explain the ideas which underlie the variations. That is exactly what Alexei Shirov does on his DVD. His explanations are all the more valuable because they are delivered by a player who himself has been responsible for developing the theory of the Najdorf. The author also makes use of games played by others in lines where he himself has not played any.

Alexej Shirov was born in Riga just like world champion Mihail Tal, and also his play­ing style reminds many chess fans of the young Tal. In the beginning of the 90s, a comet-like rise brought the young Latvian to the world top within the shortest of time. Being no older than 22 years, he already had an Elo rating of nearly 2750 and belonged to the absolute elite. Since then Shirov has been one of the best players in the world, delighting all chess fans with original and amazing ideas on the board.