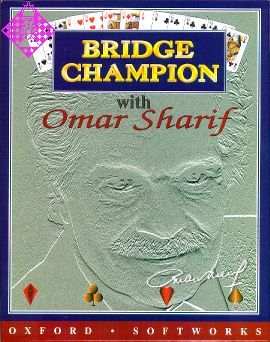 Take out a Contract

Extending the frontiers of computer bridge simulation. Bridge Champion has gone beyond the limits of all other programs to bring you the ultimate, extremly powerful, yet easy to use bridge system. With Omar Sharif as your own personal mentor, experience the atmosphere of the Riviera in your own home with superb sound and full-colour high-resolution graphics. Bridge Champion has been developed in liason with the greatest experts in the world to provide a challenging opponent for the experienced player, as well as being a guide and playing companion for the novice player.

Bridge Champion enables you to play against human or computer opponents either on your computer or via a computer network. Just some of the bidding systems supported are 5-Card Majors, Standard American, ACOL (Strong and Weak NT). Conventions include Stayman, Blackwood, Baron, Flint, Astro, Jacoby Transfer, and numerous others. The bidding conventions are fully user-selectable.

Bridge Champion keeps you fully informed by using advanced natural language techniques to actually explain the reasons behind its bids and plays as well as its internal understanding of your bids!

The bridge engine at the heart of Bridge Champion is now nearing a decade of intensive development. The user-interface has every possible feature you could desire, presented in an intuitive easy-to-use style. The many features of Bridge Champion give you complete control over the game. You can set up your own hands to practice slams or work on specific aspects of your game, and even explore alternative lines of play using the excellent Take-back and Re-bid features.

Bridge Champion hands you the tools you need to become a master craftsman in the world's greatest card game. Coupled with detailed supporting documentation and carefully implemented on-disk tutorial features, Bridge Champion is set aside in an exclusive class of it's own.