The store will not work correctly in the case when cookies are disabled.
Artikelnummer
LXGILSTPAR1914
Autor
Anthony J. Gillam 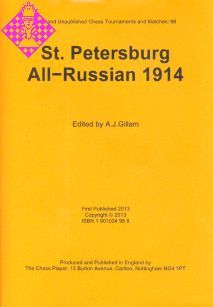 Between the years 1900 and 1914, Russian chess made enormous strides because of the appearance of Bernstein, Rubinstein, Nimzovich, Salwe and other, lesser players, offset by the loss of Chigorin and Schiffers. By 1914, Russia was the strongest chess playing country in the world.

Despite this, the organisation of the chess community, at anational level, was still non-existent. The collection of tournaments held in St. Petersburg in late 1913 and early 1914 were organised by a local committee which evolved into the Russian Chess Union.

The purpose of these tournaments was to find a qualifier to play in the proposed grandmaster tournament which was eventually held in St. Petersburg in April/May 1914.

The tournaments were played at the very fine headquarters of the St. Petersburg Chess Society, Liteyny 10, S1. Petersburg. The hours of play and time limit are currently unknown but one of Alekhines annotations refers to a lack of time approaching move 30, so we can assume that the first time control was at that point.

It is unlikely that this book contains all the surviving games. It has not been possible to make a full search of the Russian press where there should be a few more games. The names Qf the openings for the missing games were given in the Russian chess magazine Shakhmatny Vestnik 1914.