The Art of the King's Indian 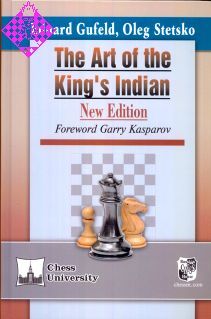 This book is a comprehensive 2014 update of the classic manual on the King’s Indian Defence by Eduard Gufeld.

The King's Indian is one of the most exciting ways for Black to play against 1.d4. It has been a regular feature in the games of great attackers like Mikhail Tal, Bobby Fischer and Garry Kasparov, all of whom have used it to create the type of unbalanced positions which every aggressive player likes.

The KID remains a very popular choice at club level as well.

Variations covered in this book include Sämisch Variation, Classical Variation, Four Pawns Attack, as well as many sidelines.

This is by far Gufeld's best book ever, and it offers one of the best explanations avalaible of the principles, the ideas, the strategies and the tactical patterns of the Kings Indian. This NEW edition has been improved, expanded and updated thoroughly by IM Stetsko.

With a Foreword by Garry Kasparov.

004 Garry Kasparov. Through the prism of time

146 Deviations from the Averbakh Variation

174 The centre is not closed

309 Deviations from the Averbakh Variation

346 Index of games by romantics