The store will not work correctly in the case when cookies are disabled.
Artikelnummer
SOWILTGM2
Autor
Simon Williams 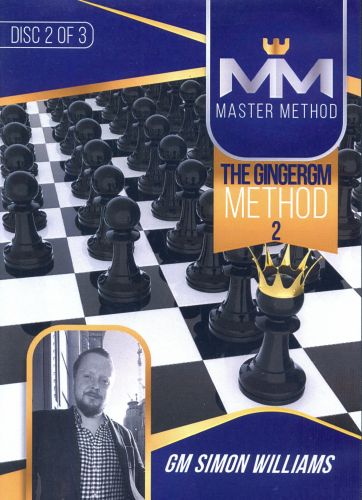 Now GM Simon Williams, a master of chess tactics, explains how to cure this problem.

Simon, aka “the GingerGM”, builds on the ideas from his first “Ginger GM Master Method” and now focuses on chess tactics, the most important skill in chess.

In this new 15 hour course , Revolutionize your Chess, Simon reveals all his favorite attacking secrets for crushing your rivals in spectacular fashion!

Learn how to get fantastic positions with a complete attacking repertoire, focusing on the must-know strategies and tactical motifs.

His highest rating so far is 2550, achieved in November 2009. In 2009, he organized the Big Slick International in Purley, London, which comprised an invitational GM tournament and FIDE Rated Open.

Some of his Achievements:

In 2003, he finished second at the British Chess Championship.

In 2005, he won the British Blitz Championship.

In 2009, he finished second at the British Chess Championship.

He was the joint winner with Gawain Jones of the London Chess Classic FIDE Rated Open in December 2010, with a rating performance of 2690

Is this product for me?

Revolutionize Your Chess (the Gingergm Method 2)

If you’d like to improve your overall chess skills then this course about chess tactics is just right for you.

The Ginger GM, Simon Williams, will show you how to create winning plans with a solid chess middlegame strategy.

Here are some of the things you’ll get:

GM Simon Williams will walk you through some of the most common mistakes the club players make and will also tell you who to overcome those type of mistakes in this video course.

Learn how to get fantastic positions with a complete attacking repertoire, focusing on the must-know chess middlegame strategies and tactical motifs. With your chess pieces in aggressive formation early in the game, you will be ready to destroy your opponents!

Learn when and how to launch an attack in the middlegame, from the GM who models his game on Mikhail Tal’s! And piece it together with a positional understanding that allows you to get those great positions in the first place.

With your chess pieces in aggressive formation early in the game, you will be ready to destroy your opponents!

The second part of the course helps you seal the win. Learning from the games of such giants as Tal, Alekhine, Botvinnik, and Karpov, you will learn some advanced methods for finding the very strongest move.

GM Williams teaches you innovative concepts such as “the awakening”, and will share his #1 secret for improving your visualization skills!

Jump to the next level with GM Simon Williams’ Revolutionize your Chess!

Part 1: How the openings connect to the middlegame

Thinking in the right way

Attack with the Isolated Pawn

How to get your Isolated Pawn positions with 1.e4

The ideas behind the French Defense

Typical attacks, tactics, and plans in the French

The ideas behind the English Defense

Typical attacks, tactics, and plans in the English Defense

Part 2: How to find better moves

How to Calculate and Attack

Typical Patterns and Keeping the Pressure on!