The store will not work correctly in the case when cookies are disabled.
Artikelnummer
SOWILTGM
Autor
Simon Williams 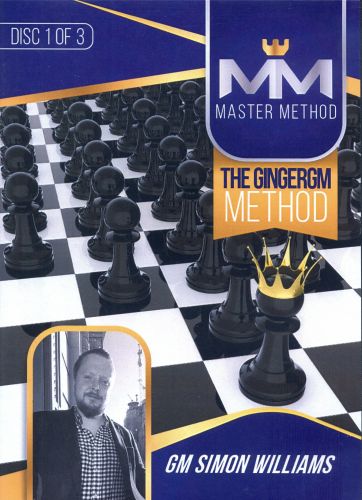 Want to realize your actual chess potential but don’t have much time to study? GingerGM Simon Williams has you covered.

In this comprehensive 15-hour course, Simon reveals the chess improvement secrets and shortcuts that helped him become a GM with a fraction of the time and effort it takes most people.

You’ll learn how to create an opening repertoire that fits your style and how to become an expert on it – not by memorizing a ton of theory, but by absorbing the key patterns.

Learn when and how to launch an attack from the GM who models his game on Mikhail Tal! And piece it together with a positional understanding that allows you to get those great positions in the first place.

GM Simon Williams (aka GingerGM) is an English chess grandmaster, author, and commentator.

Some of his Achievements:

In 2003 and 2009, he finished second at the British Chess Championship.

In 2005, he won the British Blitz Championship.

He was the joint winner with Gawain Jones of the London Chess Classic FIDE Rated Open in December 2010, with a rating performance of 2690 Elo.

Is this course for me?

There are numerous chess books, chess videos, chess DVDs and chess articles which deal with the topic of chess improvement.

Plenty of strong chess players and authors share their thoughts on effective chess training with the chess world. Still, 90% of all club players read all these articles and watch countless chess videos, but their Elo rating does not improve at all.

This training course has been specially designed to help you improve your overall chess skills even if you don’t have the time to study several hours per day.

GM Simon Wiliams shares the secrets and shortcuts that allowed him to reach Grandmaster level, in less time and with less effort than it takes most people to accomplish it.

In addition to all this, you will also receive rarely-discussed tips on rapid games, accurate calculation, player psychology, and killer endgame instinct.

After completing this awesome course and implementing what you learn in your own games, you will be ready to become one of the most feared competitors around – even if you only have 1 hour a week to study.

Enjoy your ride to improve your chess level!

Secrets of the opening as White

Secrets of the opening as Black

From the opening into the middlegame

When and how to launch an attack

When to trade pieces

How to improve your positional play

How to improve your tactical play