The store will not work correctly in the case when cookies are disabled.
Artikelnummer
LOPALTKI
Autor
Richard PalliserGlenn FlearYelena Dembo 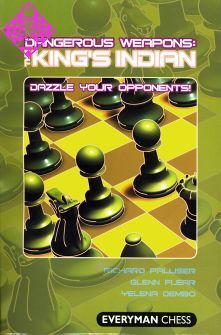 Are you tired of playing the same old openings time and time again? Perhaps it's time for a change, but you cannot decide between the numerous options available? Here's the answer: choose Dangerous Weapons and amaze your opponents with new and exciting opening ideas!

In this book, three renowned opening experts get together to take a revolutionary look at the ever-popular King's Indian. Instead of travelling down well-trodden and analysed paths, they concentrate on fresh or little-explored variations, selecting a wealth of 'dangerous' options for both colours. Whether playing White or Black, a study of this book will leave you confident and fully-armed, and your opponents running for cover!

Dangerous Weapons is a series of opening books which supply the reader with an abundance of hard-hitting ideas to revitalize his or her opening repertoire. Many of the carefully chosen weapons are innovative, visually shocking, incredibly tricky, or have been unfairly discarded; they are guaranteed to throw even your most experienced opponents off balance.

Grandmaster Glenn Flear and International Masters Richard Palliser and Yelena Dembo are all highly respected authors who are renowned for their creative opening ideas and expertise.

The King's Indian Defence has long been one of the most exciting openings around. Indeed, it has a certain magical quality to it; we can all name brilliant sac­rificial wins with this aggressive opening by such players as Bronstein, Geller, Fischer, Nunn, Kasparov and Radjabov. Unsurprisingly the King's Indian is very popular with all levels of player and, indeed, it is my hope that a wide range of players will appreciate the ideas presented in this work.

In keeping with the Dangerous Weapons ethos, one will not just find new ideas here, such as 7...Nh5 in the Classical, but also rehabilitated ideas like 6...e5 against the Four Pawns Attack. The ideas presented are by no means just for Black, though. Indeed, one will find some dangerous tries for White in the Four Pawns, as well as a more strategic Averbakh repertoire.

Throughout this project I have been very impressed by the creativity of my co­authors, and am already looking forward to trying out their well-researched ideas myself! Glenn Flear wrote chapters 3, 4, 9 and 10; Yelena Dembo contributed chapters 1, 6,12,13 and 14; and I penned the rest (chapters 2, 5, 7, 8 and 11).

As usual with the Dangerous Weapons series, this has been a most enjoyable work to produce. Indeed, I just hope that the reader likes studying these ideas as much as we enjoyed analysing them!

180 Further Constriction with the Averbakh